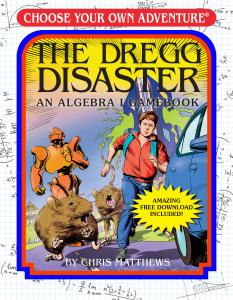 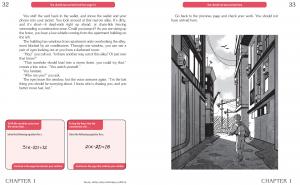 The Dregg Disaster: An Algebra I Gamebook reads like a classic CYOA with dozens of choices and endings except you solve equations to move forward in the story.

As a math teacher, I search for ways to bring rigorous math to my students with excitement and humor. I never found a book that matched that energy, so I wrote one myself!”
— Chris Matthews
WAITSFIELD, VERMONT, UNITED STATES, September 23, 2022 /EINPresswire.com/ -- Chooseco, publisher of Choose Your Own Adventure® (CYOA) gamebooks, the fourth bestselling children’s book series of all time, has announced the release of "The Dregg Disaster: An Algebra I Gamebook." The Dregg Disaster is also the authorial debut of middle-grade math teacher Chris Matthews.

The Dregg Disaster is a fast-paced crime caper centered around finding the notorious but elusive Levi Dregg, founder of the Dregg corporation. It reads as a regular CYOA, but with a catch: readers must solve algebra equations to get to the next page in their story. Dregg includes dozens of choices and twenty endings and features giant rats, laser robots, runaway forklifts, and bars of stolen gold.

The 200-page gamebook is divided into 50-page chapters, each followed by an “Adventurer’s Advice” section to help students solve math problems featured in the story, and includes a free download with more practice equations.

First-time author Chris Matthews struggled to find a fun math workbook to engage his students. “As a math teacher, I search for ways to bring rigorous math to my students with excitement and humor. I never found a book that matched that energy, so I wrote one myself!”

"The Dregg Disaster: An Algebra I Gamebook" is available this fall (publishing October 4, 2022) wherever great literature for children is sold.

About Chooseco
Chooseco is a purpose-built publisher that relaunched the groundbreaking Choose Your Own Adventure series of interactive gamebooks in 2006. Since then, Chooseco has sold over 15 million copies of original bestselling, and all-new books. The series has been translated into 40 languages. Over 270 million books are in print worldwide. www.cyoa.com

About Chris Matthews
Chris Matthews is a middle-school math teacher from Spokane (Washington) who loves working with students and creating games that encourage mathematical exploration. He has been teaching math for ten years and currently teaches 7th and 8th-grade math in Bucaramanga (Colombia). He earned his master’s in education in 2020 and is a proud alumnus of Bike & Build, Americorps NCCC, WWU, and Camp Reed. When he is not teaching or writing, Chris spends time riding his bike and watching bad movies.