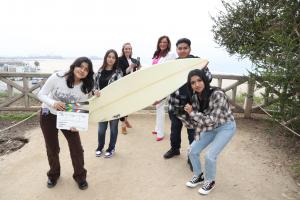 LOS ANGELES, CA, USA, April 1, 2022 /EINPresswire.com/ -- Youth Charity Film Festival, Cinemagic and The British Consulate in Los Angeles have joined forces to launch a creative and innovative new film production that will stimulate debate and discussion on environmental and climate change issues using film and media as the vehicle.

The award-winning Belfast based Festival marks its return to live events and projects in Los Angeles this week and the team are embarking on new creative industries opportunities for young people from diverse backgrounds.

Under the guidance of Cinemagic industry professionals, 20 young people aged 15-21, will create a short film supported by British Consulate in Los Angeles addressing social responsibility to inspire change and give a platform to the opinions and voices of young people. The participants will have the chance to develop their talents and employability skills in a range of production areas as well as earn a credit on the film that is going into production later this year.

Joan Burney Keatings MBE, Cinemagic Chief Executive said, “With thanks to funding from The British Consulate in Los Angeles we look forward to offering this valuable skills development programme over the next 10 months. Cinemagic has a long-established relationship with The British Consulate and are excited to build on this with a new project for 2022. We are immensely proud to partner with the UK Government, a global leader in the fight against climate change to help share the story of our planet from the perspective of the next generation of young leaders.

The completed film will be screened in the British Consulate in Los Angeles, in schools throughout LA and submitted to international festivals. Cinemagic will work with the young people to devise a script and story on environmental issues that they are passionate about and issues that affect their community.”

Emily Cloke British Consul General in Los Angeles said, "This project gives young people a platform to express their thoughts, hopes and fears about how their generation will live with climate change. This is a wonderful example of the strong links between the British and Los Angeles film industries and I will be proud to share those stories."

The Rt Hon Brandon Lewis CBE MP said “I am delighted to see this collaboration between the British Consulate in Los Angeles and the Cinemagic Festival. Cinemagic is another example of what Northern Ireland has to offer on the world stage. It is a fantastic organisation which continues to support our youth. This project will see young people developing and enhancing their film making skills which will hopefully provide increased opportunities for them.

Earlier this month the talents of over 150 young filmmakers from Northern Ireland were celebrated at Cinemagic’s Celebrate Creativity Showcase in Odeon Cinemas, Belfast, hosted by Pete Snodden. The award-wining youth film festival charity brought together the next generation of creative industries professionals to mark the achievement of producing eighteen films and behind the scenes documentaries in the last eighteen months. The showcase premiered a selection of the short films as well as a performance by young Cinemagic musical theatre participants who recently completed a training project with the charity. A host of the films produced by Cinemagic have gone on to be selected or awarded at Film Festivals around the world.

Notes to Editor:
The British Consulate in Los Angeles represents the interests of the United Kingdom in Southern California, Arizona, Hawaii, Nevada, and Utah, as well as the US Pacific Territories. As part of our commitment to building deeper relationships with the United States, we work within communities to strengthen the bonds between our peoples, and act as a force for good along our shared values.

COP26 is the 26th Conference of the Parties to the United Nations Framework Convention on Climate Change (UNFCCC) - a treaty agreed in 1994 which has 197 Parties (196 countries and the EU). United Nations climate change conferences are among the largest international meetings in the world.

Cinemagic Based in Belfast, Northern Ireland, Cinemagic is a charitable festival for young people. Set-up originally by the local screen agency, Northern Ireland Screen, the festival was conceived as a cultural antidote and a creative arena for self-expression for all young people during the troubles. For 33 years the organisation has provided a vital outlet of independent cinema showcasing & promoting a programme that offers a unique window to the world. The sustained quality and considered nature of the festival’s cultural programming and the calibre of industry events, guests and film showcases marks Cinemagic out as the premier youth arts organisation in Northern Ireland. As well as providing an essential safe and welcoming space for local cinema-lovers, and the arts community in general, the role the festival has played in uniting communities and its dedication to promoting inclusivity is to be celebrated. Cinemagic delivers festivals and productions in Belfast, Dublin, London, New York, Los Angeles. In 2022 Cinemagic will be embarking on its first project in the Middle East in Jordan.
Cinemagic passionately believes in the huge benefits to our audiences of young people from visiting creatives and speakers attending the festival to present their work as well as sharing advice, tips, and knowledge to the next generation of film, television, radio, and online professionals. Hearing first hand from those working in the industry inspires and ignites active and memorable learning.