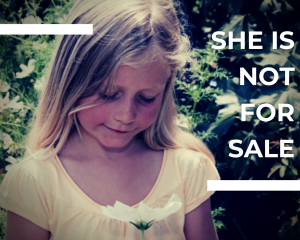 Another Kind of Pandemic Targets Children, Youth, Teens. Every childhood is worth fighting for.

Human trafficking respects no borders or boundaries. There is no link between survivors of trafficking and a specific place, age, race, or economic/social status.”
— Stacey Efaw, Executive Director, Selah Freedom
SARASOTA, FLORIDA, UNITED STATES, April 1, 2022 /EINPresswire.com/ -- Perhaps no greater public awareness occurs than in April when Americans observe National Child Abuse Prevention. We see how far we’ve come as a society to acknowledge how prevalent this epidemic has become and how it adversely alters young lives. But, more importantly, this is a chance for state and local organizations to validate their commitment to communities working together to prevent child maltreatment before it occurs and provide support to those in need through valuable resources.

As we begin to emerge from over two years of unprecedented stress and hardship, youth, teens and families need our support. Unfortunately, the confluence of a devastating pandemic and the worst economic crisis in nearly a century have increased the risk for child abuse and neglect. We must join together to combat child abuse in all of its forms — through negligence, mistreatment, or physical, emotional, or sexual abuse.

However, the sad truth lies in the fact that there is a distinct link between child abuse and sex trafficking in America, yet most don’t make the connection. And while all factions of society work cohesively to educate parents, educators, healthcare workers and others to spot the signs of child abuse, thousands of children and youth slip through the cracks. As a result, they could become prey to those who lure them into sex trafficking.

This April, Selah Freedom, Florida’s largest anti-sex trafficking organization, is geared up in their ongoing efforts to raise the much-needed awareness that child abuse and sex trafficking are linked. Based in Sarasota, Florida, Selah Freedom recognizes that nearly all “survivors” in their anti-sex trafficking programs have been victims of child abuse. For 11 years, they have built a solid foundation to bring freedom to their survivors of the sex trade through five life-saving programs: Awareness, Prevention, Outreach, Residential and Organizational Consulting. They work closely with law enforcement, the court system, school districts and community groups. However, the challenge remains to educate the general public that those with prior childhood sex abuse are most at risk of being recruited into sex trafficking.

“Human trafficking respects no borders or boundaries. There is no link between survivors of trafficking and a specific place, age, race, or economic/social status,” says Stacey Efaw, Executive Director of Selah Freedom. “There is this myth we tell ourselves that sex trafficking is just an international issue. Trafficking within American borders by Americans is a pandemic, and a history of sexual abuse is one of the factors that could put someone at risk of being lured into one of these dangerous relationships.”

Efaw says sexually abused American children are being “groomed” into a potential life of sex trafficking. When any abuse or trauma goes unaddressed, it creates vulnerabilities, especially when it comes to sexual abuse. The guilt, shame, and confusion created can be easily exploited by traffickers and those with ill intent. “The connection between a history of sexual abuse and sex trafficking becomes clearer when you understand the “grooming” process, which can include introducing drugs and creating a dependency, or exploiting children in the foster care system by portraying themselves as a family figure.”

What is the solution?
Issues as complex as human trafficking have no easy solution. Still, Florida is paving the way to eradicate sex trafficking in radical ways: Two years ago, the state legislature passed a law (CB HB 519) mandating the provision of comprehensive, developmentally appropriate, and age-appropriate K-12 health education curriculum that focuses on the prevention of child sexual abuse, exploitation, and human trafficking; Selah Freedom is working with researchers at the University of South Florida in a first-ever, court diversion program for survivors of human trafficking and exploitation to help them turn their lives around by offering housing, job training, counseling and other services. The researchers’ work could become a model for similar programs around the country.

Finally, at this writing - a milestone for Florida’s fight against human trafficking - as Florida legislation has passed the Bill (HB 1439 ) that prohibits public lodging establishment from offering hourly rate for accommodation; increases criminal penalties for soliciting or procuring another person to commit prostitution or purchasing services of person engaged in prostitution; provides for additional court-ordered requirements, minimum mandatory period of incarceration, & civil penalty; provides that human trafficking victim expunction of criminal history records does not apply to specified offenses; removes requirement for specific evidentiary standard when determining human trafficking victim status in absence of official documentation, and creates a Statewide Data Repository for Anonymous Human Trafficking.

Selah Freedom’s Prevention Team offers monthly virtual training opportunities, among other initiatives, to elevate public awareness. This month is “Freedom for Teens,” a video-based training for those who want to expand their understanding of sex trafficking, exploitation, recruitment and more on Thursday, April 21. Sign up today, https://www.selahfreedom.com/events.