On The Island With Charles Darwin 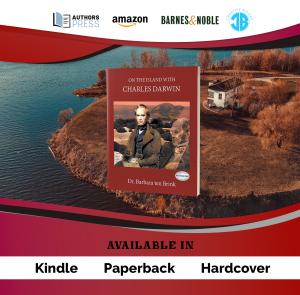 A BIOGRAPHY OF CHARLES DARWIN’s Journey ON the Island

“Anyway, that is the conversation according to my memory and my telling of it especially since I was speaking Spanish and he was speaking English intermixed with the Spanish ...”
— Excerpt from On The Island With Charles Darwin

LONDON, UNITED KINGDOM, March 25, 2022 /EINPresswire.com/ -- Author Dr. Barbara ten Brink will be one of the featured authors in the upcoming London Book Fair 2022 with her published book titled On The Island With Charles Darwin. A biography of the life and work of Charles Darwin while visiting the Galapagos Islands based on numerous accounts and documents.
Dr. Ten Brink created fictional characters native to the island who share his ideas AS Charles Darwin began to visualize his Origin of Species. The
experience and entrepreneurial spirit of young native naturalists assisted Darwin as he witnessed and collected many animal species.

“While clearly stating that this is a work of fiction and imagination, ten Brink provides ample evidence that she has researched the setting, the methodology used by Darwin, and the journaling that led to his seminal work, On the Origin of Species. Targeting her book to older children and young teenagers like Misael, she invites them to do further study of Darwin and the age and culture he lived in, as well as about the indigenous inhabitants and wildlife of the islands.” — Reviewed by Barbara Bamberger Scott, US Review of Books.

Dr. Barbara ten Brink is a science educator of forty-nine years. The book On the Island with Charles Darwin is the culmination of her teaching profession of science and love of nature. She traveled to Galapagos and witnessed many of the events she shared in the book, including the people she met there.

Book copies are available at Amazon, Barnes and Noble, and other online book resellers.

A Worldwide Community of Vendors and Schools Reducing EdTech Breaches